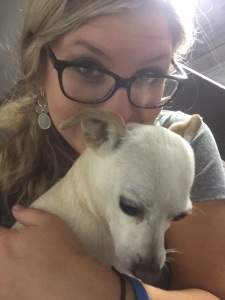 This was the day I met Millie.

My boyfriend’s sister was at her seasonal job as a nanny on the first of July when, in her words, a small, light tan dog emerged from the bushes near the parking spot she pulled into. After a couple of excitable coos and “hello’s” apparently the dog didn’t need much more of an invitation from her to jump into the car (she hadn’t even had a chance to shut the car door). Since my boyfriends and mines house was a mile away, she took this sweet, collarless terrier mix to our garage and called me at work. Side bar, if a close-living sane family member who you trust asks for your garage door keypad code, always give it to them. I was thankful I did.

One of the first things we did was take her to our vet to get her scanned for a microchip. No luck. We searched and searched and searched. We posted flyers around our neighborhood. We went to the country club where she was found multiple times to see if they’d heard of anyone missing a dog. We posted on various social media outlets… and those posts were shared like wildfire amongst our friends and family. In the meantime, “Millie,” as we had begun to call her (a variation of the name of the country club where she was found), seemed to take in every new scent and square foot of her temporary home with ease and enthusiasm. With the exception of our German Shepherd, Wrigley; she wasn’t too keen on him right away. He’s got an intimidating appearance but is a big softie.

The days went on and we came to the heart-wrenching conclusion that she must’ve been a drop. We realized most likely someone, for whatever selfish, inhumane reason, abandoned her. Which is extraordinarily befuddling considering she’s one of the most adorable, well-behaved, house-trained and loyal dogs I’ve known. My boyfriend and I debated back and forth about whether taking her to a no-kill shelter was a better option for all parties involved than keeping her. You see, less than 2 months prior, we lost our beloved boxer to a common heart disease, and weren’t exactly sure if the timing was right to introduce a new dog into our lives. I waited weeks to put a collar on her. I knew once I clicked that fastener, she’d be a member of our family.

My boyfriend and I were watching television one night and he abruptly mentioned the elephant in the room (more specifically, the dog in my lap.)

“So I guess we’re keeping her?”

He said it as more of a rhetoric than a legitimate question. I responded with a smirk.

Earlier that week, my boyfriend’s sister had given us a pink and purple floral hand-me-down collar her dog had previously worn. I put it on Millie that night and she was ours.

The last thing I want to do is turn this narrative into some kind of run-of-the-mill, philosophical meandering.

What I mean by that is this:

I feel like I can get halfway through a post or article and if I sense that the story is going into a moral, blatantly Christian spectrum of thought I stop myself dead in my tracks. My boyfriend actually caught me once with a literal snarl on my face after reaching that point in a post. A snarl, for God’s sakes! So forgive me if I sound cynical and bitter and prejudiced but I can’t stand that kind of writing. It disgusts me. And I know some readers legitimately are moved by it and I think that’s beautiful. In my eyes, that’s where writing as an art form is most evident. When someone strings together a bunch of seemingly random words, they never really know if it’ll reach anyone’s understanding. I mean, it’s my biggest fear and my greatest insecurity I’m working to overcome. But when someone else does step out of that darkness and say “Hey, I get that. I like that,” something incredible is born.

So I’m not judging at all. Yes, that kind of writing style isn’t my thing but I’m so thankful fellow writers feel that calling because it matters. If it matters to one person out of 7 billion, it matters.

Gosh, I get distracted easily.

I’ve discovered I have this notion that ideas and writing and posts must serve a greater purpose. They need to affect people. They need to have that label of “heavy” or “powerful” or “significant.” This is an echo of my previous post about writing for myself versus writing for others. Sometimes it’s okay to just write or talk about something just to share. I’m having to learn that. I tend to get so infatuated with the idea of peer approval (I’m a chronic textbook people pleaser) that I lose sight of the art of writing. The art of writing is true freedom from those expectations.

So with all that being said, I don’t have a thought-provoking point that ties into my narrative about our new dog, Millie. I’m happy with her in our home and she’s (cautiously) getting acquainted with Wrigley.

But I will end by saying I was inspired by a conversation recently I had with a new friend. We were by a campfire at a beautiful state park nearby and after many beers, the conversation shifted from work and surface level subtleties to matters of a deeper capacity. She said something that kind of hit my soul profoundly: “I’m not one of those people who believes everything happens for a reason. Because everything doesn’t.” It seemed like some newfound concept as it’s shock ricocheted around in my head. Shit, I was about ready to call up the Pope and every news outlet in the world and tell them about this amazing, prophetic philosopher I had just met. But in reality, I’m sure a ton of people agree with this idea. It’s probably nothing new at all. In my rose-colored world full of rainbows and divine reasons, I’d never heard anyone declare it with such certainty and conviction.

So I’ve been digesting that whole thought process for the past couple weeks. Regarding the Millie situation, I’ve been grabbing at straws trying to find the supreme reason for her coming into our lives. Maybe our passed-on boxer was trying to tell us something with Millie’s arrival. Maybe she jumped into my boyfriend’s sisters car because the universe knew our other dog needed a companion when we didn’t (even though she, of course, couldn’t care less about him). Or maybe she came into our lives simply because someone else didn’t want her and, by total chance, she ended up in our home. Maybe there’s no more to that conclusion. No existential purpose, no stardust or divine intervention. It just happened.

I don’t know why or how exactly Millie ended up with us. Either way, stardust or not, what I’m trying to say through all this writing out loud is that I’m glad she did.

One thought on “The Gospel of Millie”

My brain is chaos... Writing is my organization.

Helping women find their highest self through faith, self love and body acceptance.

A New Kind of Man

Where the fire and the rose are one

Daily affirming my existence through the lens of inferiority

Through it all, your spirit's alive

English articles and translations of my Hebrew articles

My thoughts. My Feelings. Inside My Mind.

"In every real man a child is hidden that wants to play." - Friedrich Nietzsche

Tales from the mouth of a wolf

This Being the 4th of Nothing

Master of Something I'm Yet To Discover

Confessions of a Jack of All Trades

The window on the street

'We must, between periods of digging in the dark, endeavour always to transform our tears into knowledge' - Alain De Botton

News feminist philosophers can use

FIT IS A FEMINIST ISSUE

This had better be quick. They're gonna find me soon.